After 19 action-packed weeks, we've finally come to the divisional round of the NFL playoffs — a week where the genuine contenders separate themselves from the pack and leave it all on the field as they push for the Super Bowl.

The 2023 divisional round gives us four games between eight teams, starting with Jaguars-Chiefs on Saturday, Jan. 21. Could Trevor Lawrence possibly pull off the upset, or are the Jags just a mere speed bump to yet another Patrick Mahomes Super Bowl appearance?

Here is how all eight remaining teams stack up heading into the divisional round, along with one reason for hope and one reason for worry for every squad.

Reason for optimism: Patrick Mahomes and the passing game

Over the regular season, Mahomes ranked top-five in PFF passing grade (89.0), yards per attempt (8.1) and adjusted completion percentage (77.8%), and he finished with 500 more passing yards than the next-closest quarterback. He's one of the best signal-callers in the NFL and leads an offense that finished first in expected points added (EPA) per pass play from Week 1 to Week 18. 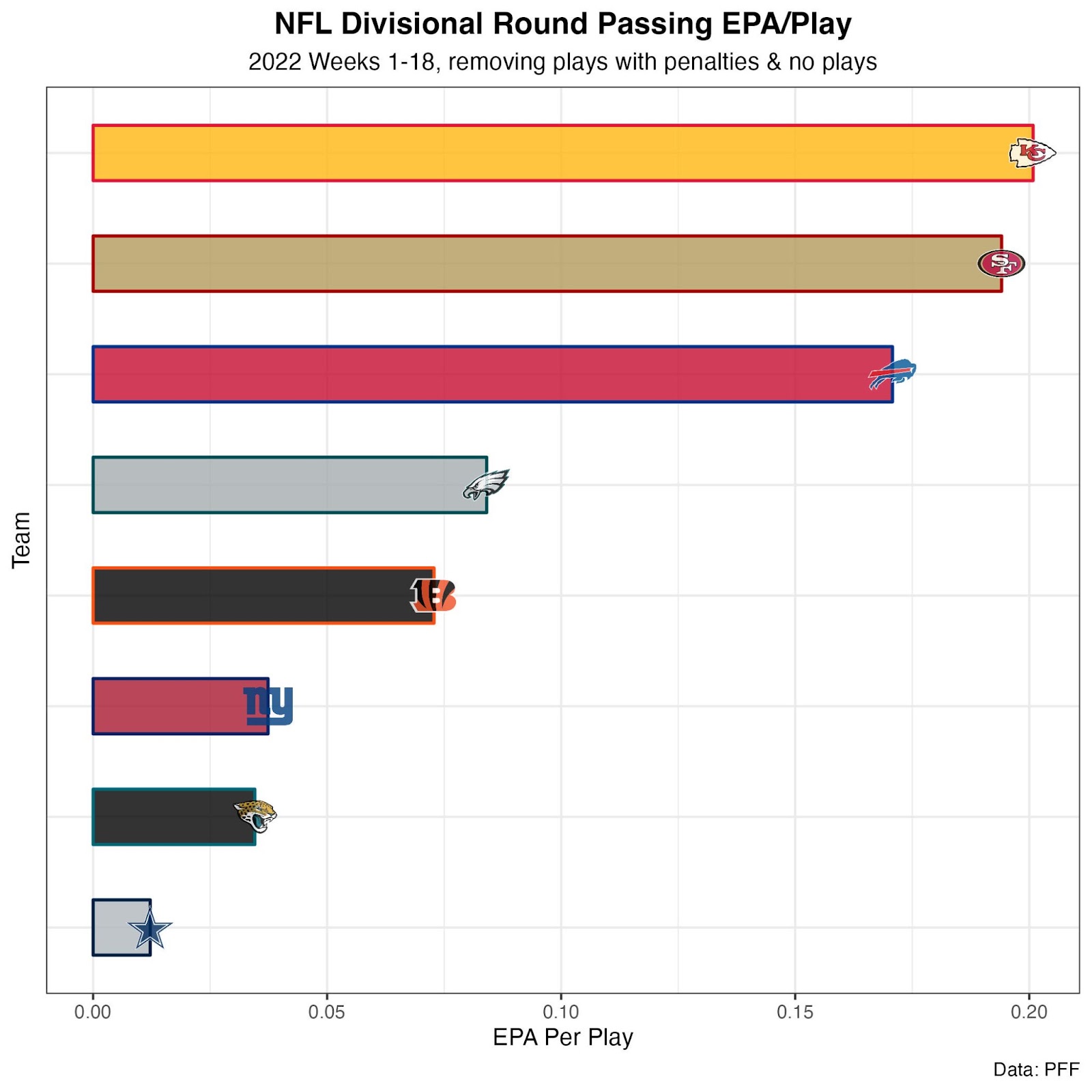 Over the regular season, the Chiefs earned a sub-60.0 PFF grade in run defense and tackling. They ranked 16th in the NFL in EPA allowed per run play and missed 69 tackles against the pass to lead the league.

Reason for optimism: A top-tier defense

The 49ers have the highest-graded defense (84.6) of the eight teams left, and their -0.132 EPA allowed per play over the regular season ranked second to only the New England Patriots. They are the only team left with no two-point conversions allowed, and they have allowed the lowest conversion rate of the teams left at 27.2%. 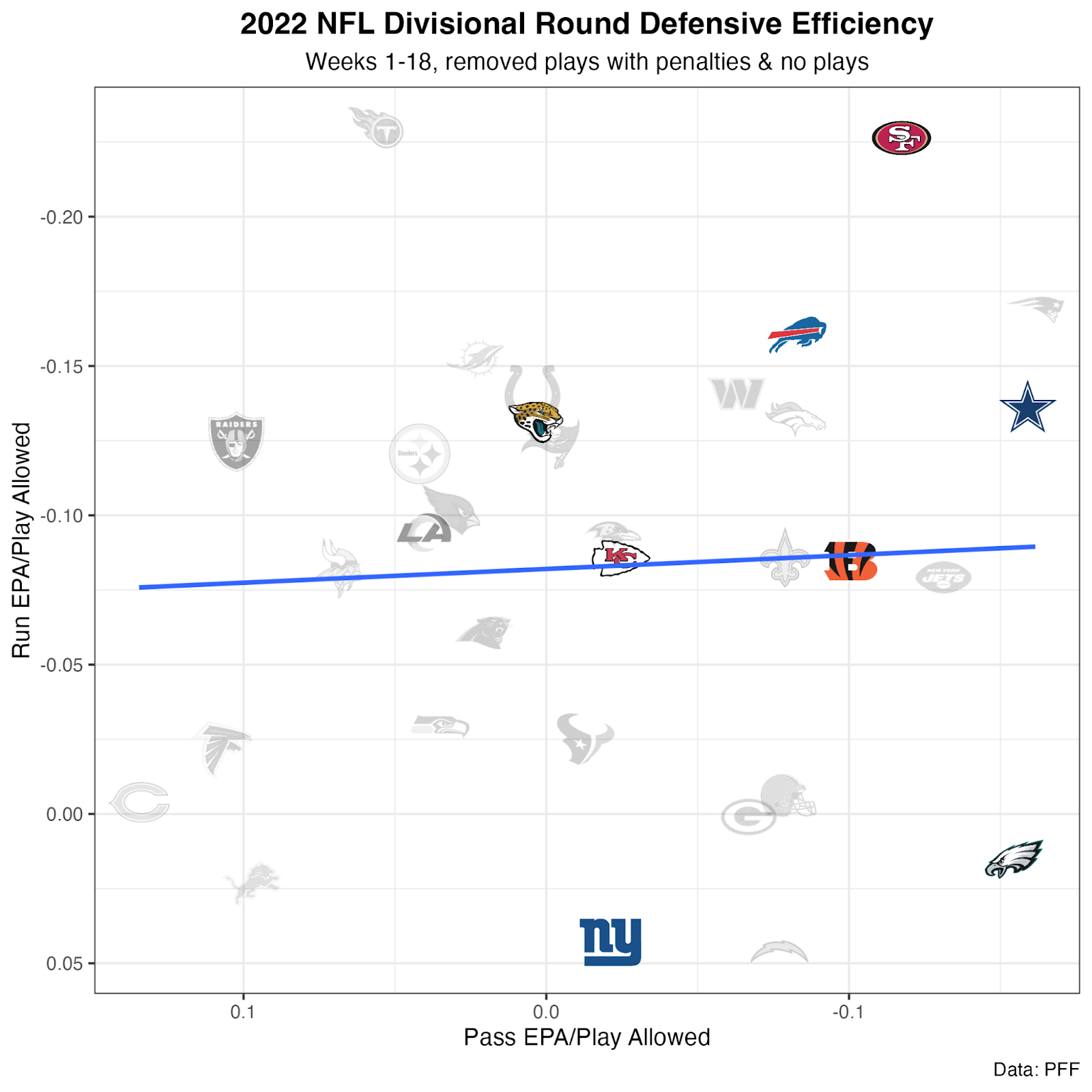 Brock Purdy has brought the 49ers this far, but more proven quarterbacks will be taking the field this weekend. The last overall pick of the 2022 NFL Draft has somewhat relied on short and schemed-open throws so far — he has a 92.5 passing grade on throws targeting open receivers, but that mark drops to 47.7 when he's throwing to a pass-catcher with one step or less of separation.

Reason for optimism: A stingy defense

Despite losing several key players to injury, the Bills defense has been effective this year, particularly in coverage. The team ranks top-10 in team coverage grade, EPA allowed per play, passer rating allowed and yards allowed per pass play. 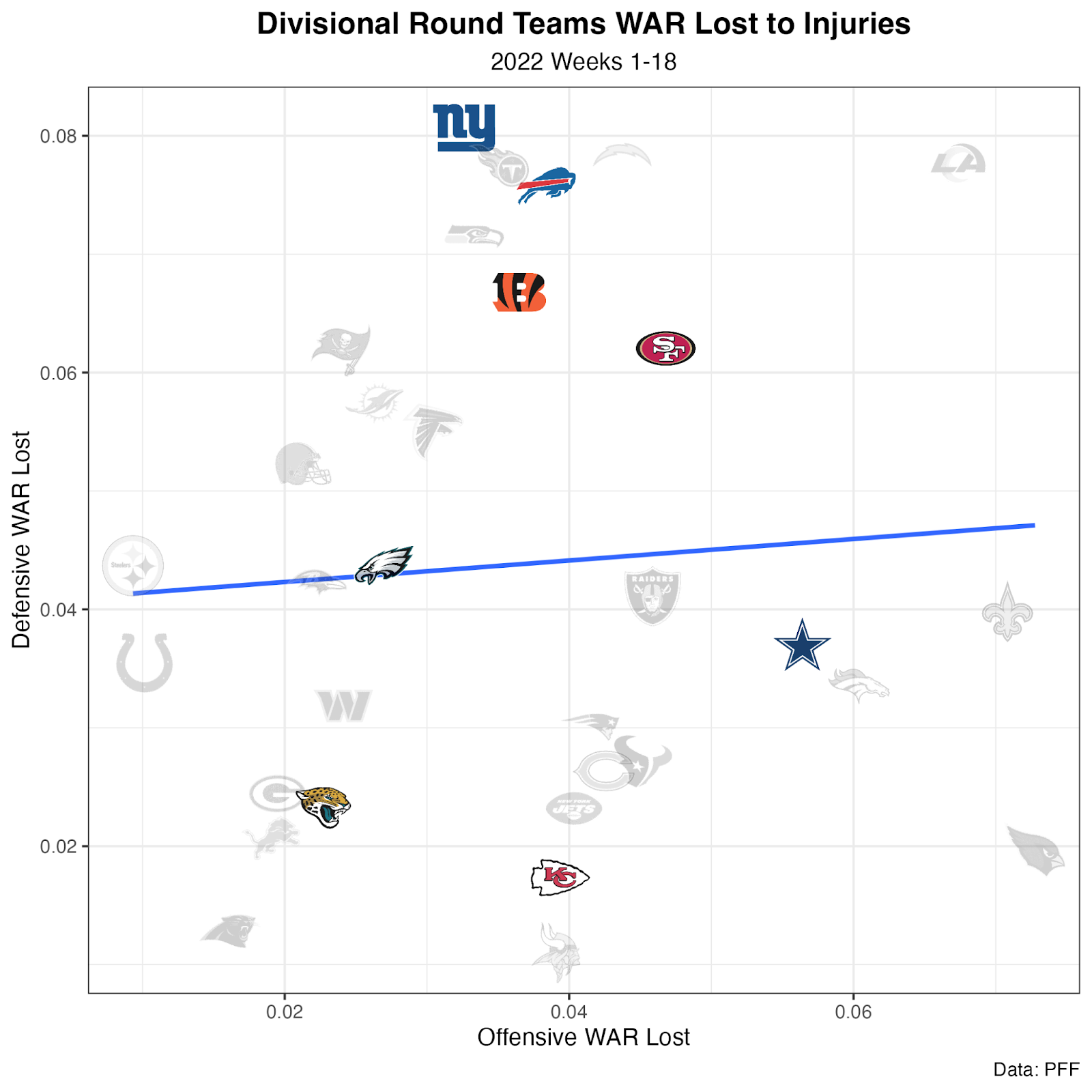 Reason for worry: The offensive line is allowing pressure

Despite this, QB Josh Allen leads the position in PFF grade and big-time throw percentage on pressured dropbacks.

Reason for optimism: The best offensive line in the league

The best offensive line of the 2022 NFL season. The unit allowed the fewest sacks (11) and the second-lowest pressure rate (18.9%) over the regular season, ending the campaign with the highest pass-blocking grade among the league's 32 offensive lines.

Reason for worry: Run defense has been an issue at times

We saw how the Commanders ran over the Eagles in their November win. Nick Sirianni's squad gave up -0.016 EPA per run play over the regular season, 28th among the league's 32 teams.

Reason for optimism: Joe Burrow and the passing game

Burrow boasts the highest PFF passing grade of all the starting quarterbacks in the divisional round (90.4) and ranks top-five in big-time throw percentage and turnover-worthy play percentage. He avoids turnovers and gets the ball to his receivers efficiently.

Reason for worry: It's Déjà vu with this offensive line

The Bengals are now down three starting offensive linemen after left tackle Jonah Williams dislocated his kneecap against the Baltimore Ravens in the wild-card round. Burrow was sacked four times this past week and will be going up against a defense that generated pressure at the 12th-highest rate in the league during the regular season.

The Dallas defense has been a force to be reckoned with. During the regular season, Dann Quinn's group generated the highest pressure rate in the league (40.8%) and is second among the eight remaining teams in conversion rate allowed (27.9%).

Reason for worry: Prescott under pressure

A lot has been said about Dak Prescott‘s 15 interceptions, but his work under pressure has also been a pain point for Dallas. This season, the Cowboys signal-caller has gone 60-of-116 for 699 yards, nine touchdowns and six interceptions on dropbacks under pressure — good for just a 52.9 PFF grade.

Reason for worry: The offensive line needs a clean game

No remaining quarterback has produced a worse PFF passing grade on pressured dropbacks than Trevor Lawrence (29.2). The Jags have faced the Chiefs already this season: Lawrence was sacked four times, and the line was beaten 16 times across 51 passing plays.

Saquon Barkley leads the remaining running backs in rush yards (1,365), running touchdowns (12), rushes that have resulted in a first down (65) and explosive runs of 10 or more yards (34). And then there's quarterback Daniel Jones, who has run for 702 yards at 5.8 yards per carry and 7.7 yards per scramble. 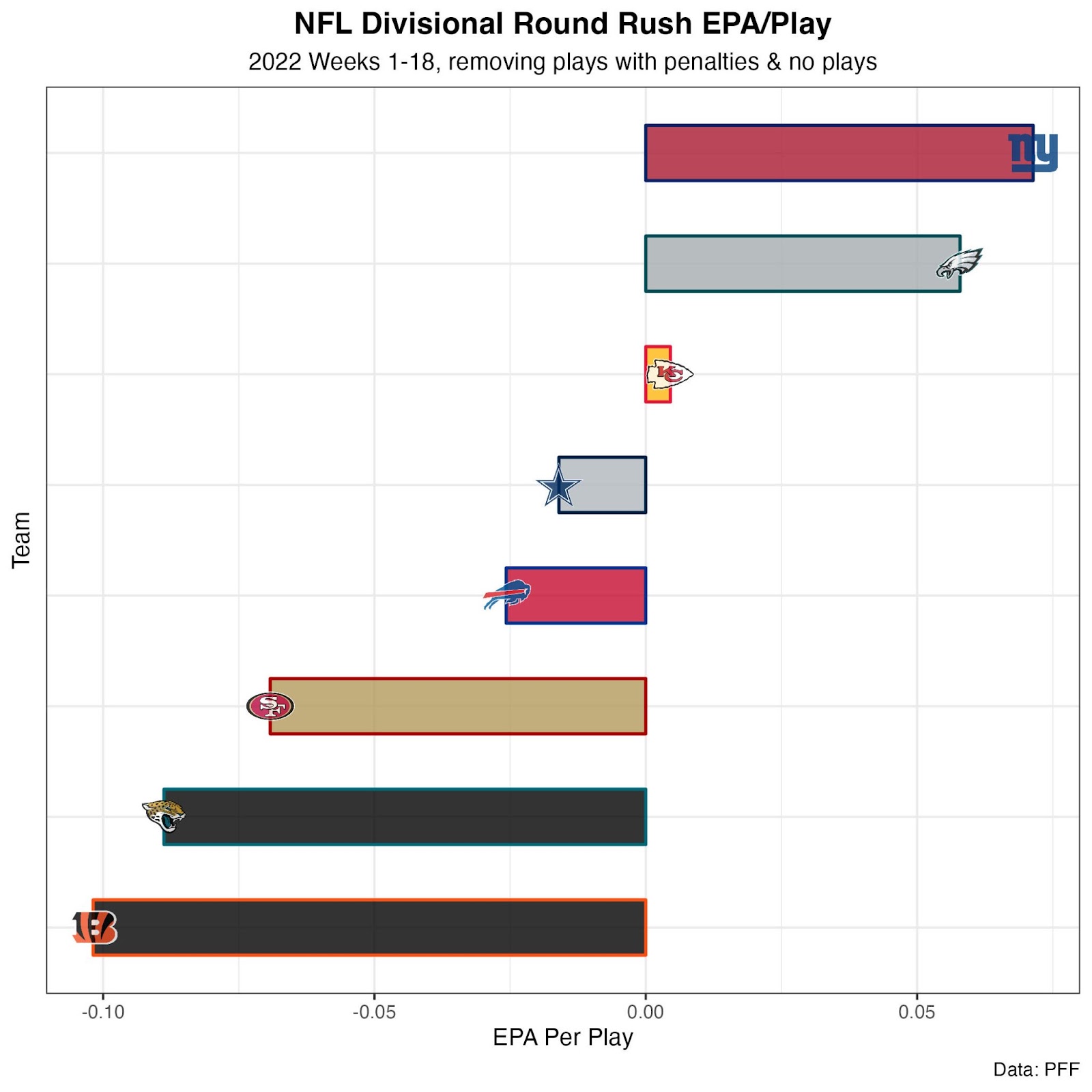 Reason for worry: weakness against the run

The Giants have the lowest-graded defense (56.6) out of the eight teams left. Their run defense has been negatively graded on 68.1% of plays, which is also the lowest rate among the eight remaining teams.